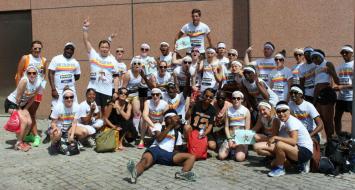 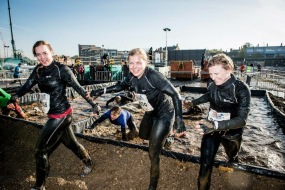 One invaluable lesson I have learned over the past decade or so masquerading as an adult, is that you cannot do this life shit on your own. Finding your tribe is, at different stages of your life, is imperative to staying sane. This goes for moving countries, learning a new skill, or entering motherhood. There are many many ways to skin a cat, and many many people who probably do it just the way you’d like to and can show you how.

There have been a few pivotal periods in my life where this has come to bear, the first when I quit drinking (finding mates that are awake on a Sunday morning is a good place to start), the second when I took up running and found the inimitable Run Dem Crew and the third when I became a Mother. Thankfully there were a few awesome people in both sets of previous tribes that by the time mamadom hit, I had a pretty great collection of babes and their bubs to add to my village.

But as with all good things, you have to keep at it, your priorities and abilities change, you may find yourself in a different place, your kids get bigger, your circumstances change (for better, for worse) and as such the tribe needs to evolve to include more people, maybe a few drop by the wayside, some grow with you some grow out of you (and you them).

I find myself at one of these crossroads, with a three month old son, creaking hips and a desperate need to let off steam. As mentioned, any hitting of any bottles (even tiny ones) is a no-go, there’s only so much Netflix any one mushy brain can take, and the lethal combination of caffeine and sugar, while it got me through the first foggy months, is a sure fire cocktail to whip up my anxiety levels, screw with my sleep and my waistline. So I need something else, and Baby Yoga ain’t going to cut it.

My go-to quick fix for the past 5 years or so has been a run. A quick one, a long one, a run with mates, the solo run, the ‘I’m just taking the dog around the park’ run, the training in the rain run, the run that has random obstacles in it, the ‘why-the-fuck-am-I-doing-this’ run and the ‘thank god I went for a run’ run.

I am no speedster, my race times are not enviable, but that was never the point. I run to keep sane. I have met some of the best people through running, it’s opened doors in other areas of my life creatively – I started writing again,  took up photography – it’s taken me travelling to run in mad cities with mad people, got me fit, made me brave, and ultimately saved my ass on more occasions that I can count. It’s the thing I do on a Sunday morning when I would have been nursing a hangover in bed. It’s built my confidence and shown me the heroic in others. Putting on a pair of running shoes for me was as transformative as alchemy.

But my pregnancy and running didn’t really get on, with the aforementioned creaking hips, and a core that is still recovering from accommodating a baby, I have not run more than 3 miles in the best part of a year.

I’m basically back to being a newbie. No fitness to speak of, and a deep seated fear that I won’t bounce back, given walking a mile has me wishing I was being pushed in the pram.

Now I know that’s unfounded. I will bounce back. In what form is still yet to be seen. But in the spirit of reaching out, if I have any hope of reclaiming my nikes, and my beating my 10K PB, I’ll need help. I’ll need a new tribe. Or a patchwork venn diagram of the tribes that have gone before. Mates that run and happen to have kids. Or freelance mates who don’t run but would like to give it a bash and don’t mind a few babies tagging along

So I have downloaded my trusty Couch to 5K app from days of yore, dug out the lycra and I’ll be hitting the parks of London, building up the all important base line, with pram and changing bag to boot.

Here’s the ask, I’d love company, its motivating and makes schlepping a sleep deprived body and niggly baby around all that much easier to manage.  If you’re new to running, haven’t run for ages and you’re free on a week day morning, or just fancy a (slow) jaunt around some of the best parks in the world, drop me a line here. I don’t bite, I won’t (can’t!) run fast so please don’t be intimidated and it should be a great way of getting out and about, blowing off the cobwebs and seeing more of the brilliant city. Hopefully getting the babies to sleep too.

And nothing beats a banging brunch post run. I need brunch back in my life

One thought on “Have baby, will run (for brunch)”