The year did not start well. Having Shingles and suffering a self-imposed quarantine when I was supposed to be training for 3 half marathons, two 10ks, a 100km bike race, seeing all the people in London and prepare for starting a new role was not ideal. I was furious about being ill. I thought I had really been looking after myself, obsessively it would appear, and that’s never any good.

But it was exactly what I needed. A kick up the backside to evaluate what was important – so I gleefully handed out race packs like a belated running Santa, cancelled all my social plans and decided to focus on the cycling and getting my head around a new job.

(Also can we talk about how marvellous it is just to say no? ‘No I can’t come out, because I am sitting in my pants watching Law & Order SVU and eating endless rice cakes. Basically winning’. Saving that for another post)

February saw me hitting Boom Cycle 3-4 times a week to keep up the fitness and also saw the advent of our annual work conference. By the time Feb 26th rolled around I hit Heathrow feeling exhausted and excited. A holiday, a few days catch up with the teams in SA and THE bike race. No biggy.

Now, to be honest, I was under-trained. My fitness levels were good, but I am nervous as all hell. I just hadn’t logged the long miles. But I also knew that the nerves could be a good thing, that additional hit of adrenalin that carries you through and drives you over the tough hills. I know these nerves well. I get them before every running race (even the fun ones), every time I get up on stage to present even though I have been doing it for well over 10 years, and every time I have to have those difficult, but essential conversations. Where there is risk I feel it. Every single time.

There is a school of thought that maintains the body can’t tell the difference between anxiety and excitement on a biological level (you science nerd please feel free to refute this!). Apparently, you release the same chemicals, the same heightened awareness, same surge of energy. It’s how your mind then interprets the feeling that makes it positive or negative. Hit of fear plus rush of endorphins is a pretty powerful cocktail. I have learned that pushing through the fear is essential to making life more open, interesting, full. Without it it’s small and claustrophobic and dull.

But I have also learned I need support to just go ahead and do it. On my own I’m no good. My mind is very frequently not my friend. It’s risk adverse, and lazy and prone to catastrophic thinking. I need people to point out the mad, destructive nonsense I tell myself and remind me its all good. And that if it goes wrong, that’s OK too.

Then this popped up in an article I was reading enroute to Cape Town. Pussy Riot hits the nail on the head. Given this is in relation to being arrested for political activism, and my cycling is hardly revolutionary, but the sentiment is bang on. 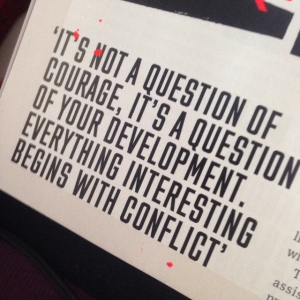 So its a good job I don’t listen to my head. Because a week after I find myself in South Africa, Mother Nature decides to set fire to the entire Southern Peninsula, and that is no exaggeration. My catastrophic thinking is having a field day. Headlines like, ‘Hellfire Rages in the Cape’ adorn every lamppost in Jo’burg while I’m psyching myself up for my first ever bike race. People are being evacuated, dams are near empty, rock falls are a serious risk given the plant life helps stabilise the mountain side and is now no longer existent. Thankfully the Cape fire volunteers and fire servicemen and women put on the most heroic defence and curbed the blaze in 3 days.

So the race is still on. I am now officially bricking it. However, the Argus distance is cut from 109km to 47km. It’s just not safe to release 35,000 cyclists onto the route that will then cut off all of the southern suburbs in the wake of the most devastating fires in recent memory. Of course I’m gutted, but also ever so slightly relieved, in this scenario I get to test my riding legs on shorter distance. Until I remember it’s with exactly the same amount of people. 35,000 cyclists.

And the panic sets in.

The major difference I have found between cycling and running for me is the logistics. You can’t just chuck your shoes in your bag and head out on the road wherever you are. There’s the BIKE. There’s the helmet, the shoes, the kit you need for the bike for punctures and general maintenance. For this race I rented a bike in CT. Already breaking my cardinal rule of racing – GO WITH WHAT YOU KNOW. And crucially I don’t know this bike. I also don’t know if the bike is even going to show up, as the correspondence I’ve had with the company renting it to me has been patchy. Everyone is more laid back in the Cape. They aren’t all obsessively checking emails every 3 minutes. And swearing about lack of wifi.

Thankfully I get to tell my head to pipe down as the bike does show up and discover it’s ever so slightly too big. I panic again. So much so this time that I draw a complete blank and forget how to get on the damn thing. It takes a good 10minutes for me to get over this sheer terror, but once I do the bike is fine. It’s in hand. I haven’t forgotten how to ride. But how on earth am I going to do this with 35,000 other people?

My head creates these visions on a loop for my viewing pleasure, while trying to sleep: Causing a huge crash because I can’t stop quickly enough, the brakes failing, the wind blowing me off the road and into the sea, the wind blows me into other riders, etc etc and they escalate and get more horrific the less sleep I get. You don’t worry about this stuff when you run. You just stop. You don’t crash. You very rarely get blown off your feet. This whole endeavour begins to feel like a huge mistake that I am wholly unprepared for.

Until my dad, a seasoned veteran of the race and elite cyclist, decides he’s going to give up his elite start time, seeing as the shortened distance won’t count towards his seeding. He’ll cycle with me instead. It will be fun. He says. I think he could see just how panicked I was. ‘Just stick to the left, don’t look behind you and raise your hand high if you need to pull over’ he says when explaining cycle race etiquette. ‘Hold your line, and if someone clips your back wheel just keep going, he’ll fall but you probably won’t’. This talk of wheel clipping is terrifying when you’re in your holding pen with little more than elbow room with other cyclists, all looking like they ride professionally, with jerseys from Dubai and Hong Kong and Italy. And me with my flat pedals, no clips and ashen face, a big ZERO on my race number where is shows completed tours.

We shuffle our bikes forward and hug the left, they start counting down the minutes to start and I find myself feeling a mixture of gratitude that I have made it this far, and fear that I may vomit on the French woman in front of me, ruining her 13th tour. According to the bib. But I am here, in Cape Town, riding the (mini) Argus with my Dad. Something that has been on my bucket list for years. Something I thought would probably stay firmly inked on a list and not manifest itself like this. Me, terrified on a bike that’s too big, surrounded by cyclists and my Dad, having a laugh at my expense, but also there just like he was when he took off the training wheels some 30 years ago.

Of course it we have a total blast. I manage to get on the damn thing for a start. I don’t crash into anyone, no one crashes into me. I hit the hills, test the gears and find myself over taking people. There is some power in the legs after all. We hit the downhills and I slowly relax and take my fingers off the brakes. It really is pretty close to flying. I find some speed on the flats. The wind does not blow me off, in fact it blows me home once we turn around and head back for the finish line. And just like that it’s over. 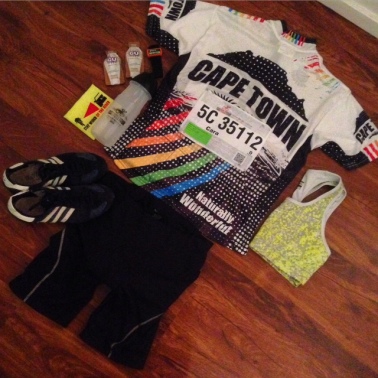 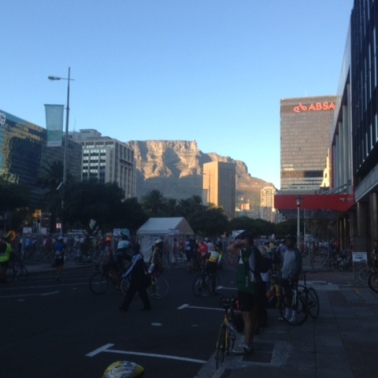 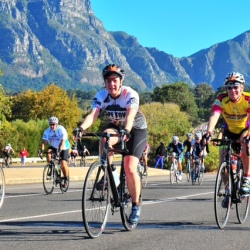 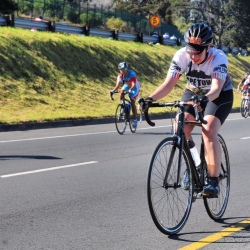 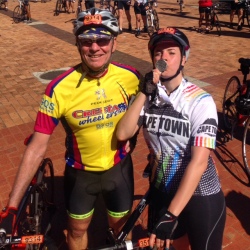 We finish in 2 hours and 12 minutes, and I feel pretty confident we could have done it in just over 2 if I’d relaxed on the down hills more. I have no idea how that tallies, but gives me a rough idea that I could probably do a sub 4:30 Argus with loads more training and a bike that I am comfortable with. So that’s the next goal (nowhere near my Dad’s best of 2:58… but there’s still time).

I have been well and truly bitten by the biking bug, and with Spring just around the corner back in London, I really have no excuse to get back on the bike there too. Out of my comfort zone. Where all the good stuff happens.

One thought on “Wheels on Fire: Riding The 2015 Argus”