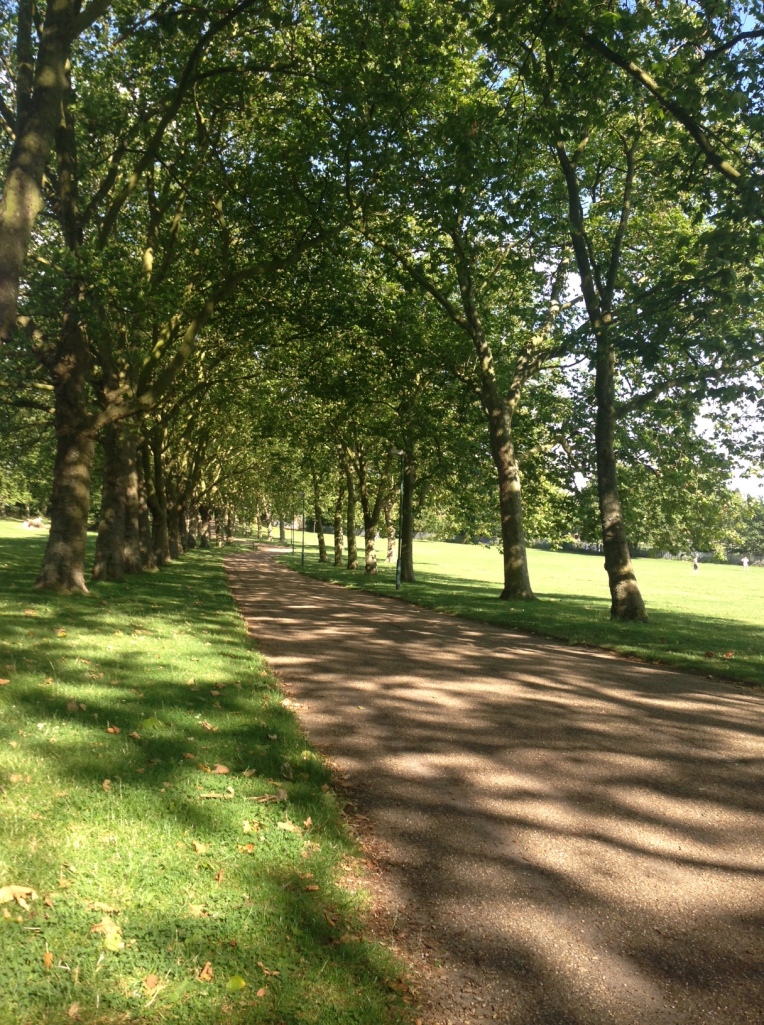 Today a woman lost her daughter in the park. It was a sunny Sunday, about 3pm, loads of kids kicking about a football or three, many a dog walker like ourselves and a few cyclists stripped down to their lycra shorts and soaking up the last of the summer sun.

We were throwing a stick for the dog, and drinking coffee, sitting under one of the big oaks that lines the make shift football pitches, watching a guy trying to fly a kite without any wind. This is not a remarkable day. I have done two loads of washing, put off the vacumming and berated myself for not sorting through the bathroom cabinet. A standard day. Nothing special, but a pleasant day. No rain, and it’s warm for late August. We left our jackets at home and I’m kicking myself for wearing jeans, but pleased we’ve made it out the house. The dog needs exercising and who knows how long we’ll have this weather for. Its September tomorrow after all.

I’m feeling a bit annoyed, inexplicably so, although probably because R took too long getting the coffee or spoke in an off tone to the dog. In reality, I’m probably annoyed as its Sunday afternoon and the weekend is winding down.  My annoyance is peaked as someone is shouting and cutting across the usual park buzz. It’s not the shout of a kid retrieving a ball, or someone calling their rogue dog. Its a distressed shout. And its repeating one word over and over.

I’m not really paying attention as this stage, so I can’t make out the word, but its reached that volume so that I have noticed. I’m walking up the small embankment to retrieve a better throwing stick for the dog and as I’m walking closer to the main path I catch the tail end of a conversation.

‘…she’s 4 and she’s on a scooter. She just went over the hill and I thought by the time I caught up I’d see her on the other side, but I can’t see her…’

A calm voice, but with enough of a tremor to betray the rising panic. I put two and two together, she was shouting a name.

‘..right, and you’ve looked by the swings and the cafe?’ The conversation continues with an elderly couple who have stopped to offer help. Although I’m not sure they’re elderly, I’m guessing by the tone as I’m not close enough to tell and there’s a few hedges and shrubs between us.

I’m still not really paying my full attention as the dog has now got into a tiff with a Maltese-cross and I’m telling her off. But a few more people have now congregated around this woman and someone says,

‘I think you should call the police’

But the sun is shining, and the park is tranquil and its Sunday. There aren’t even that many people around –  not enough to lose someone. And its a big open park. Scenes like this don’t play out now do they? I wander back down to the oak tree where we’ve plotted up and I mention what I have heard to R. He’s just has surprised as I am.

‘Here? Did you just pick all of that up from walking up the hill and back?’

I start to wonder if I day-dreamed it, but then I see the mother, walking very fast, talking on her mobile with another child trailing after her. She must be calling the police. I start to feel a bit queasy.

I’m almost subconsciously now scanning for a lone child on a scooter. Hoping to see her coming out from around a tree, from behind the playground steps, may she was hiding?  I’m torn between running after the mother and asking if I can help to reminding myself she is calling the police and doesn’t know me from Adam, and that I’ve just earwigged the whole conversation and I’m not holding all the facts.

We carry on throwing the stick for the dog. Continue with our conversation. Finish our coffee. Walk a bit further around the park. I tell myself the professionals will be on the scene soon, and that she’ll be found queuing up for ice-cream with no knowledge of the drama that unfolded. But I’m scanning the park regardless.

Sometime later, with the dog suitably exhausted we meander back past the oak, along the main track where I had overheard the conversation. I can’t see the mother, or any sign of the police. The man is still trying to fly his kite. Kids are still kicking about a ball. There’s a healthy queue for the ice-cream van. No sign of anything untoward. We must have missed the reunion. The relief. Probably some tears and then reprimanding the child for wandering off. But lots of hugs, That’s what’s happened. Otherwise we’d see some kind of gathering with men in high vis, and questioning. I tell myself its all worked out. Perhaps that child I saw with the mother while she was on the phone was the original lost child after all.

We make our way home. But it hit me again how the extraordinary things happen on ordinary days. We don’t get the luxury of ominous theme music to alert us to something coming down the road, no heads up, no warning. We do not get the chance to prepare ourselves. We cannot possibly know what will happen on a Sunday afternoon at the end of August. When throwing a stick for the dog.

We know this, of course, on an academic level, but we still think we can prepare for every eventuality, that we have no blind spots. If we save enough money, or take enough care, do all of our research, have all of the control. Or that we have the luxury of waiting for the right time. For the stars to align, for the perfect conditions. And it both scenarios there is no such thing. We are not in control. There are no perfect conditions. Most importantly, we have no guarantee that we have the luxury of time, and that it is a huge luxury.

Maybe it’s that I am hurtling head first into my mid-thirties, or that its already September, which basically means its Christmas, or that I am seeing time pass so much quicker as our friend’s kids grow up (and speak! go to school!). That many of my contemporaries are now experiencing age-related illness with parents, and we were in our teens over 20 years ago. Even though it really only felt like the other day we were scaling the walls to go clubbing past our curfews.

Unsettling, uncomfortable and disquieting yes, but a good reminder to get on with the business of living, and stop putting off all the things that I want to do ‘when I have time’ and just do them. Even if it is just a quiet Sunday Afternoon.