I have known for sometime that I was going to have to re-evaluate my training runs with Stella. The vet had recommended that after 7 to 8 years, the pressure on their bones from the impact could do more harm then good and suggested trail running for the majority of the time. So I have been taking her out on shorter runs, or concentrating on parks over pavements.

Stella is now heading on for 9  (that’s 63 in doggy years) and realistically I don’t think I can take her out running as often as I used to without risking wearing her out. Not that you’d think to look at her, she still has the bounce and just plain crazy energy of a Jack Russell crossed with all the Staffie determination. But its all in much shorter bursts and she is exhausted when we get through the door.

I really noticed this today when we went on a very short (but fairly quick) run round the old neighbourhood, she wasn’t rearing to go, she stayed right next to be rather than careening out in front, and she was panting hard after 1.5 miles. Now that is partly the heat, but her lack of interest to really gun it on the straights, made me think it might be time to retire my coach. She deserves a break!

To say I am very sad about this is an understatement. If you know me or have been following this blog, you’ll know she was one of the main reasons that I started running in the first place, nearly three years ago.

She was my motivation to get out the door in the early days, getting all excited when I put on my trainers (even when I was less than inspired) and helping to spur me on out the door. She helped me gain confidence in being my company on long runs, and later on night runs. She was my body guard too, she can look fairly ferocious, and interestingly I got a LOT less street harassment from idiot bar flies when I had her on the lead! She was my partner on intervals, racing me up hills, barking at the top of Holland Walk while I wheezed my way up and down. I can’t really imagine not running with her in the run up to my next foray with the Royal Parks race.

So as a tribute to the best coach a gal could wish for, here are her best bits 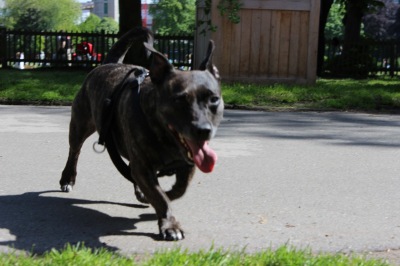 Thank you Stella. You got me out the house, through Couch to 5K, up to half marathon distance, and the only casualty was that one squirrel.

Looking forward to long walks in the park and chilling out on the sofa. And I promise to stop dressing you in hoodies from American Apparel