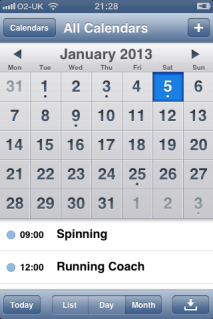 Ah January. Everyone is bleak, skint, and exhausted from the excesses of the festive season. Invariably the weather reflects the general mood by being damp, cold and unpredictable. Which means that these very same people, while cutting back on booze, sugar and general fun have turned their attentions to GETTING FIT/LOSING WEIGHT. But having not quite acquired a taste for exercise of the outdoor variety, they hit the gyms. In force and en masse, taking up space in the change rooms, slots in the spinning classes and mats on the gym floor.

Don’t get me wrong, I was one of these newbies, everyone has to start somewhere. I fell off the treadmill, dropped weights on my feet, nearly flew head first over the handlebars in spin and of course, got ALL the steps wrong in Body Attack –  to the point where the instructor told me to ‘just concentrate on the feet dear, don’t worry about the arms yet’. I even wore grey (Don’t – it shows up all your sweat patches – everywhere!)

But year in and year out I am always astonished at the lack of common sense people have, and equally the sheer lack of willingness to learn. There must be an assumption that you gain fitness through osmosis and it starts working as soon as you walk through the door, and this somehow makes you deaf / impervious to the instructor’s suggestions, or the instructions on the equipment.

I have many mad, bad examples of this, but my current favourite has to be the newbies who turn up at spin, in major kit – clip ons, the lot – and then proceed to freewheel for 45 minutes while bouncing up and down so rapidly on the seat I’m surprised the seat doesn’t cave in. They totally ignore the instructor when he suggests increasing the resistance to stop the bounce, which would also make you sweat a bit and save your nether regions (win win). His very good advice was met with sniping comments, and eye rolling. Actual eye rolling.

Why people fork out £50+ a month to turn up in full gear, barely break a sweat and ignore the professional advice readily available, is beyond me and just a sheer waste of hard earned cash. Ask the stupid questions. Fall of the treadmill, you only really need to do this once, you’ll learn pretty quickly. Set your bike up wrong, make a tit of yourself in Combat, but just give it a go, you’ll get over it!

Thankfully the invasion only lasts about 3 weeks, usually subsiding around January pay day, when the impulse joiners swap the gyms for the pub again, and I get a bit more elbow room in classes. In the meantime I’m investing in more winter running gear to avoid the madness. Hooray for empty streets, crisp air and sleet!* Plus I get to have Stella for company, no eye rolling from her, she only gets bitchy when she’s after a stick and I get to tell her off when she’s behaving badly. Too bad we can’t leash the newbies.
* okay, not the sleet