We’ve all had them. This was a particularly spectacular in its badness. It goes a little something like this:

Woke up late. Couldn’t find the right kit. But that happens often enough, so I wasn’t totally put out at that point. Got Stella out the door without incident.

Two hundred metres down the road and the the sports bra unhooks. Stop run. Sort out unwieldy hook (while trying not to expose myself to all of Ladbroke Grove!). Start run. Stop run as Stella find something unsavoury to hunt. Get dog back. Start run.

Phew! Finally get the right pace and it looks like it’s all turning around. Hit Hyde Park at 4 miles and have to divert from the usual route due to horses with small children. Stella looked far to interested in the equestrian activities so I moved us along to avoid a Fenton incident. Stella still manages to cause a ruckus when she almost slams into a fellow runner with a huge stick she’s just found, which is about 3 times her size. Stop run, apologise. Start run.

Around 7kms my headphones start playing up. Right earphone conks out completely at one point. Stop run, check the wiring. Fix this temporarily. Start run. But even with the fixed headphone, my playlist is working against me. Skipping tracks every other song because nothing is really doing it. Should have had this on the playlist.

Hit 6miles and I’m feeling knackered, three to go and I’m thinking I may have to  call it day. But manage to push through. I remember at this point that I haven’t actually had any water to drink since about 8pm the night before. Ah. There’s the mistake right there. Stop run. Catch breathe, stop Stella harassing a small puppy. Start run.

Finally, the end is in sight and I can see the final goal. Just another quarter mile, over the road and I’ll be home. I’m so busy focusing on the distance, I’m not paying much attention to my immediate surroundings. And I miss running straight into Spencer by half an inch. Yes, that posh boy from Made In Chelsea. I had to swerve to avoid him and nearly came tacky on a lamp post.

Of course, I gave him a dirty look like he should have been watching where HE was going. And legged it in the opposite direction. Got to 9 miles a little quicker than expected, red faced and more than a little embarrassed. Sorry Spence.

Trainers off, dog bathed (so very very muddy today, why I am not surprised), and I’m logging the miles. Although it was a pretty horrendous couple of hours, I made the target mileage after all. I’m constantly surprised by what I can do, or overcome. A year ago, I would have given up after the bra incident! And its always good to see this result on the old HRM. Think that effort deserves some spaghetti and meatballs for dinner. Whoop! 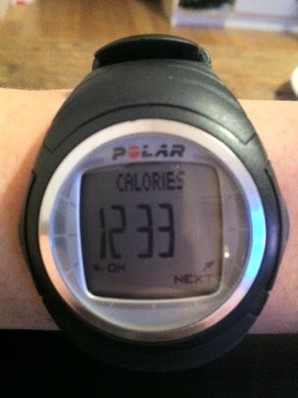